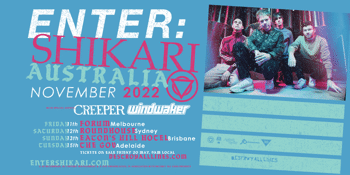 
"Australia was the last tour we did before the pandemic started, so shows have remained fresh in my memory throughout these difficult last few years. When our tours were constantly being cancelled and the band fell dormant, it was that mad run that gave me comfort - knowing that we went out on a high. To now finally have the chance to return and build on what those shows started is exciting me no end.” says Rou Reynolds, Enter Shikari

Since forming back in 2003, ENTER SHIKARI have gone on to release six full-length albums while garnering ongoing industry acclaim, and multiple awards for good measure. And armed with high-octane lashings of punk, electronica and alt rock palettes alongside personal lyricism and oft-politically charged thematics, ENTER SHIKARI continue to be one of the most magnetic forces in the modern musical landscape.

A band who crawl deeper into your soul with each listen, Southampton heroes CREEPER initially drew together over a mutual love of hardcore, punk and glam rock stylings. A fantastical and refreshing amalgamation of lush brawn, oozing elegance and immersive storytelling, CREEPER continue to be one of the UK's most exciting entities.

WINDWAKER have built an empire over the years based around explosive innovation and scintillating contrasts. Most recently in possession of their debut full-length album Love Language, WINDWAKER wrestle and reflect on the unpredictable nature of love across a super-charged twelve tracks, ultimately gifting rabid chaos flexed with glistening melodics and a staggering display of the band's measured progression since first emerging back in 2017.

As their 2022 album title Nothing Is True & Everything Is Possible suggests, the dream to have ENTER SHIKARI back on Australian shores has gone from possible to guaranteed; don't miss these meteroic nights of blistering beauty this November.