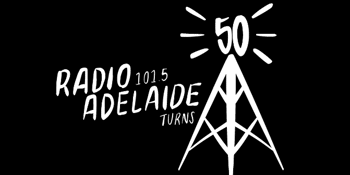 Nathan May & Parvyn
The Gov - Main Room (Hindmarsh, SA)
Tuesday, 28 June 2022 8:30 PM
1 day away
18+ (unless accompanied by Guardian)
Music
Send this event to
Radio Adelaide, Australia's first ever community radio station, is celebrating its 50th birthday!
To celebrate 50 years of music, arts and ideas, the red carpet is being rolled out and everyone is invited to performances from special guests Nathan May and Parvyn.
It's a magnificent milestone for Radio Adelaide and the community broadcasting sector across Australia - so let's celebrate!

With special guests Nathan May & Parvyn.

Adelaide-based singer-songwriter, Nathan May, has been developing his talent since the age of three, when he began playing music in church in Darwin. A graduate of the prestigious Clontarf Academy of Darwin, Nathan was inspired to make music his fulltime career after he met President Barack Obama in 2011, and was personally urged by him to follow his dreams.
Nathan is one of Adelaide’s hardest working live performers. In 2019, Nathan performed 80 live performances locally, including a showcase at the Adelaide Fringe “Garden Sessions” that has led his own solo show, Lost in The Dream, at the 2020 Adelaide Fringe which was sold out.

Parvyn is a Punjabi-Australian singer best known for her work in cult psychedelic band The Bombay Royale, and performing globally since childhood with her father Dya Singh. Parvyn’s current solo project represents a new step in her career and is informed by, electronica and jazz, her background in Sikh devotional music and her training in classical Indian music and dance.
Her debut solo record ‘Sa’, released Sep 2021, was nominated for the prestigious Australian Music Prize and Best Independent Soul/RnB Album for the AusIndies. With influences from Bjork to Anoushka Shankar, it is immersed in a reflective world of different cultures and perspectives.
'Parvyn’s beautifully modulated voice is seductive to the ear’ - Stephen Whittington, The Advertiser
‘As a solo artist, she has created a compelling, multi-genre, multicultural masterpiece’ - Cat Woods, The Australian