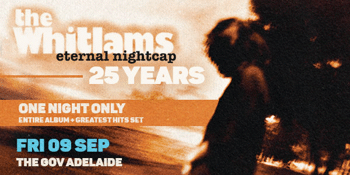 With Special Guests
The Gov - Main Room (Hindmarsh, SA)
Friday, 9 September 2022 7:30 pm
74 days away
18+ (unless accompanied by Guardian)
Rock
Send this event to
The Whitlams classic “Eternal Nightcap” turns 25 this September, and the band will mark the anniversary by playing the album in its entirety.

The album single-handedly brought the piano back onto the youth airwaves in 1997 and propelled them to Best Group at the 1998 ARIA Awards, where they dropped to their knees before Gough Whitlam who had just announced, “It’s my family”.

“Eternal Nightcap” captured the hearts of a generation by describing a whole decade of its life - the mad, emotional, love-hungry contagion of its late teens and 20s. From love (“Melbourne”) to heart wreck (“Life’s a Beach”), mad parties (“You Sound Like Louis Burdett”) to tragic friendships (The Charlie trilogy), the album kicked off with the eccentric No.1 “No Aphrodisiac” and never looked back.

In ABC Radio’s “My Favourite Album” poll of 2006, “Eternal Nightcap” was the fourth highest Australian entry at no. 27, and the album’s reputation as a cultural touchstone has only firmed over the years, with Rolling Stone last year placing it no.24 in their 200 Best Australian Albums of All Time list.

The Whitlams will follow the album in track order with a greatest hits set featuring favourites like “Gough” (1993), “I Make Hamburgers” (1995) , “Blow Up the Pokies” (1999), and a selection of songs from 2022s critically acclaimed album, “Sancho”.